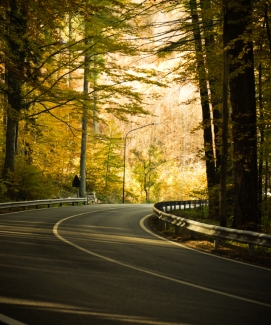 In July, I took Margie Lawson’s Immersion Master Class, an intensive three and a half day workshop on deep editing. My brain is still teeming with all the tips we learned to turn our manuscripts into bestsellers.

One day, as we reviewed one of my first-draft chapters in my current project, we came across a short paragraph about a character’s driving skills.

In the scene, my character is driving along a dark, windy road in the mountains at night when he comes across my protagonist walking along the side of the road after she’d just seen her maybe-boyfriend sucking face with another woman. (Every time I hear the words “sucking face,” I think of the 1981 movie “On Golden Pond,” where I first heard the term. The power of fresh writing!)

Anyway, the driver of the car offers my protagonist a ride home (she knows him—he’s the new man in town). She learns more about him and why he’s in town. He ends up giving her relationship advice and flirting heavily with her.

Here’s the paragraph in question:

“Hmmm,” he said, tapping his brakes before the next curve, then laying off them during the turn. He handled the vehicle as if he’d had years of experience coaxing the two-ton beast into compliance. “Any news on your grandfather?”

Questions that came up in class:

So, why am I writing about his driving skills? To fill space.

Is that a GOOD reason to include this paragraph in my chapter? No.

And there goes the delete button.

The good news is I was reminded that everything we write has to serve the story. The stuff between the dialogue can’t just be filler. It needs to move the story forward in some way—whether it’s by setting mood, building character, or showing emotions.

The other good news is I realized this is why it’s called a first draft. Don’t worry about this stuff while you’re writing hot but do pay attention to every single word when editing. I realized I write a lot of filler in my first drafts—it’s how my brain works. I think out loud on the page. That’s what first drafts are for. Editing is when you want to be aware of each word’s purpose.

For a lively post on why restaurant scenes may not serve our story and the importance of avoiding “filler” sentences, check out Rebecca Makkai’s post, “No Shoes, No Shirt, No Fiction: Let’s Get Out of the Restaurant.”

Tags: characterization, characters, dialogue, editing, Margie Lawson, writing tips
From: Craft
← Shake yourself out of a creative brain freeze by taking a walk
Don’t miss a beat: Get into the heart of your character →
One Comment Post a comment