Draw your way into a scene 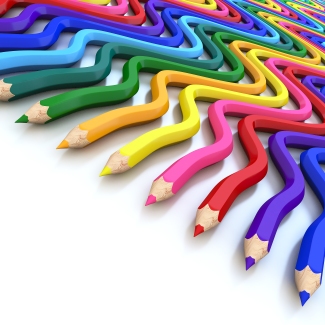 I’ve been experimenting lately with different ways to enter into writing scenes. One fun way is to use a sketchpad. I purchased a 5.5 inch x 8.5 inch Strathmore Sketchpad and colored pencils for doodling and have found it immensely useful for everything from sketching scenes to settings to drawing objects that might appear in a scene.

Not a drawer? Don’t worry, neither am I.  My “people” consist of stick figures and my depth perception is nonexistent. Fortunately, you don’t need to be Picasso to use sketching as a way to ignite your imagination.

The first thing I drew in my sketchpad was a dagger. One of my characters carries a dagger and I needed to “see” it in detail. As I was drawing the dagger and the sigils on the blade, I had a vision of the sigils glowing when activated so I added this into a scene.  As I continued to draw the dagger, I realized two other things about it that I hadn’t known before—these will also go into my story.

Next, I drew a map of the town where my story takes place. I drew the river running through town, the mountains, the canal, businesses, and where my main characters live. As I was doodling and just letting my mind wander, I had a vision of my characters hiking up mountain trails.  As I further imagined this scenario, an entirely new scene showed up.

Other ways I’ve used my sketchpad:

I’ve always wanted to learn to draw and paint so this is a great way for me to satisfy that urge. Knowing that I don’t have to show it to anybody allows me to draw anything without worrying about it being “good enough.”

Take the plunge and try drawing your way into a scene. The only rule is that you have to have fun while doing it!