Style is more than the arrangement of words on a page, part 1

by Carol Despeaux Fawcett on February 4, 2014 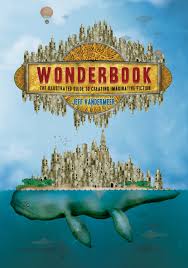 I was on a business call the other night speaking with a man who lived in Oregon when we added another woman to the call. As soon as this third party joined us, the man’s voice and manner changed. He went from sounding very normal and nondescript to suddenly sounding like a cross between Yogi Bear and a Scottish Highlander. I was totally freaked out.

He continued in this voice and manner for the entire call. Why? Did he secretly have a crush on the other woman and this was his way of sounding “debonair?” Was he terrified of her and used this new voice and manner to distance himself? I have no clue.

In the craft of writing, this Yogi Bear/Highlander persona could be called a character’s or narrator’s voice.  Voice is one element of a writer’s style–that five letter word that many writers seem to have a hard time defining.

Style relates to how the writer puts words on the page—the arrangement of the words—but it’s also more than that.

In Wonderbook: The Illustrated Guide to Creating Imaginative Fiction,

This slippery term more or less means the way the story is told; i.e. the patterns of words, phrases, and sentences through which the writer achieves certain effects….Style is the means by which the writer’s subject matter, passions, and interests reach their fullest expression on the page.

He explains that most writers fall somewhere between Ernest Hemingway (sparse) and Angela Carter (lush) and also between the painter Chagall (who always painted in the same style) and Picasso (who experimented and mastered many styles).

Though we can practice our style with such craft books as Strunk and White’s The Elements of Style or Artful Sentences: Syntax as Style by Virginia Tufte, style is not an extrinsic element–like dialogue–that you overlay onto your story from the outside. Style is intrinsic and permeates your story from the inside out.

I like to think of my “style” as the accumulation of all the other choices I have made along the way in my story: voice, description, narrative, exposition, dialogue, etc. Style encompasses all the little parts that make the whole.

To read more about writing style, go to Style is more than the arrangement of words on a page, part 2.

Tags: style, The Elements of Style, voice, writing style, writing tips, writing voice
From: Craft
← Avoid common writing problems by following Kurt Vonnegut’s advice
Love is in the air: How to write about it →
One Comment Post a comment