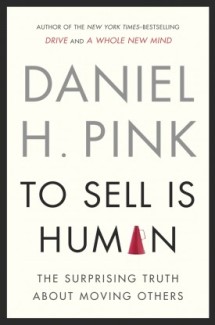 Besides being able to write and revise stories, writers need to be skilled in the art of selling. Especially nowadays, when writers are called on more than ever to sell themselves and their books. So when I heard that Dan Pink had written a book about selling called To Sell Is Human: The Surprising Truth About Moving Others, I bought it.

Along with the insight about selling, I came across some advice that applies to writing.

Pink says that when facing challenges, like making cold calls and pitching prospects, some self-help gurus might advise you pump yourself up with statements such as, “I’m the best salesperson on the planet,” and “No one is as awesome as me.”

While you must believe in your product or service and your ability to sell it, Pink says that social science reveals something more nuanced about how we talk to ourselves and its impact.

Whether our self talk (and don’t we all do a lot of it?) is positive or negative, it’s generally formed in a statement that declares what is or what will be. (“My writing sucks” or “I’ll never remember my pitch.”)

Pink suggests ditching the declarative self talk and instead emulate Bob the Builder. Yes. The same Bob who runs a construction company in the animated children’s TV series.

In each episode, Bob and his crew build and renovate projects. Bob’s catchphrase is “Can we fix it?,” to which the other characters respond with “Yes we can!”

While it’s true that positive self talk excels over negative, the most effective self talk doesn’t shift just emotions. Pink says it shifts linguistic categories. It moves from making statements to asking questions.

Researchers Ibrahim Senay and Dolores Albarracin of the University of Illionois and Kenji Noguchi of the University of Southern Mississippi conducted research that confirmed its value, Pink wrote. By asking the question, you open the door to answer the question and generate answers for yourself that speak to how you will solve your problem or excel at the task at hand.

Imagine you have a draft of a manuscript in front of you and you’re trying to work up the courage to dive in. Imagine you’re preparing for a pitch to a potential agent.

Asking, “Can I fix this?” or in the case of your pitch, “Can I present a winning pitch?” opens the door for your brain to begin generating answers, strategies, and tactical advice. I can imagine using this tactic in many aspects of writing, including brainstorming character development and creating marketing plans.

Pink goes on to say that self talk formed as questions, reminds us about the internal motivations for what we’re doing. And these intrinsic choices are often some of the best reminders about why we’re doing what we’re doing to begin with.

To learn more about selling and tips for how you can implement them, buy Pink’s book or check it out at your local library.