How listening to poetry sparked my muse: ode to Billy Collins 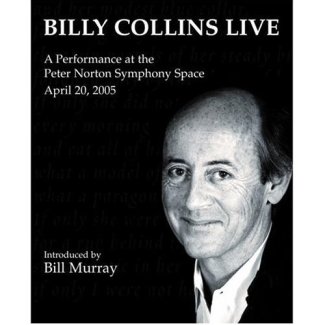 Recently, while on a six-hour plane ride, I listened to former poet laureate Billy Collins’ CD “Billy Collins Live.” After the hilarious introduction by comedian and actor Bill Murray, Collins reads nearly thirty of his own poems.

As mentioned in a previous post, “Three Ways to Feed Your Muse,” I often find inspiration in other writer’s works. As I was listening to the flow of words and ideas from Mr. Collins, one particular poem nabbed me and before long I found myself writing a new poem.

In his poem, “Litany,” Collins takes the first two lines of another poet’s poem and basically rewrites the poem in litany style (a litany is a form of prayer consisting of a series of invocations or supplications).  I, then, mixed phrases from some of Mr. Collins’ poems with my own words to create my version of his “Litany” poem. You might want to listen to his CD to understand all the connections, but here’s my first draft:

Oh, pretentious poet—to lift
the first two lines of another’s poem
and rewrite his ode to one beloved:

“You are the bread and the knife,
the crystal goblet and the wine.”
But what if you, dear poet, are really

the bread, knife, goblet, and wine?
What if we all are—body and blood,
instrument and vessel?

What if you are the rituals of each new day?
You might also be the lightly, falling snow,
the cold wind and the chickadee composing

her canticle. (But not the cicada—never the cicada).
You are probably not the mailman, nor the lanyard
of your youth. You are definitely not the potholder.

There is no way you are the dog named Dharma,
or the cat who stretches on its back
like a languid letter “L.”

I hope you are not the 300 sheep needed
to make a single Guttenberg bible.
But you probably are the last meal your wife—

or was it your cat?—cooked for you.
Maybe you’re not really the knife, after all.
Maybe, I am the knife. For women

are usually the knife. You should know this.
You are not more than a woman,
(though you could be dancing queen). So, I will be

the knife, but you can be the crystal goblet and the wine.
I will give you that—if you never rewrite my poems.
You can also be the wooden-strike-anywhere matches

and the pyromaniac mouse who will set us all on fire.
In fact, favorite poet, you could be anything—
for you are the poem, filling us with your prayer.

Tags: Billy Collins, poem, poetry
From: Craft, Poetry
← Perfecting your first page and other inspiring ideas
Where do stories come from? Find out here →
No comments yet