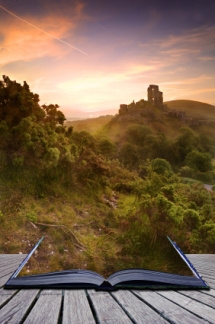 In my last post, I described what makes a high-concept story idea: one that grabs our attention or is a twist on the usual story.

1. Your local newspaper. Whenever I find an unusual article, I file it away for possible use later. Example: Years ago, I read a story in the Seattle paper about an elderly couple who’d gone on an outing to the library and then simply disappeared for three days. Both had dementia and they drove around for days, trying to find their way back home. Wow! That, in itself, is pretty unusual. I could write a poem or short story about this or base a character in a book on this story.

2. TV shows and movies. What are your favorite shows or movies? Why do they hold your attention? Some of mine:

“Castle” because he’s a writer set in the middle of a crime scene investigation. A different take on the usual crime stories. Plus the dialogue is witty and funny.

“True Blood” because it’s a vampire flick with a twist–all the vamps are out in the open and operating businesses just like the rest of us (well, maybe not just like).

I can think of a handful of other shows that I started to watch, had high hopes for, then somewhere along the way, they lost me. I got bored. They became too predictable. Think of some of your favorite shows or movies and ask yourself why they work for you. This may help you uncover a high-concept idea of your own.

3. Ask questions. “What if?” is a great one. Take any story or incident you’ve heard about and then ask “What if?”  Another good question is, “What’s different or unusual?” I did this with my memoir and took it from a so-so story to a high-concept one.

My memoir took many shapes and sizes over the years, but each time, I knew it wasn’t quite right. I was writing a memoir about growing up in a highly-dysfunctional family in a small town in the Pacific Northwest and about some of the awful things my father caused to happen in our community. But, to me, the story wasn’t enough. It took some soul-searching but I eventually decided to “come out of the closet” and write my real story.

My real story is about growing up as an intuitive in a highly dysfunctional family. Can you see the difference? Now, when I tell people what my book is about, they say, “ohhhhh” and begin to tell me about their intuitive experiences. This is another trait of high-concept ideas: they open people up. High-concept stories get your readers’ attention so they stay with you for the long-haul.

Have you ever taken a so-so idea (novel, short story, screenplay, or poem) and turned it into a high-concept one? If so, please share.

Tags: high-concept novel, writing tips
From: Craft
← Are you a panster or plotter?
A letter to writers from John Steinbeck →
No comments yet