Rented typewriter at a library leads to success for Ray Bradbury 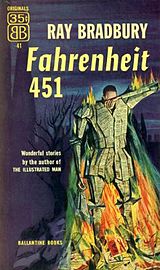 It’s no wonder the late Ray Bradbury was a big supporter of libraries and urged writers to read classics for writing inspiration.

He wrote the classic Fahrenheit 451

for a total cost of $9.80. Bradbury’s office was the library, and in 1951, he rented a typewriter for 10 cents per half hour at UCLA’s Powell Library. When the timer went off, Bradbury would read and draw inspiration from classics, including Herman Melville, William Shakespeare, and Edgar Allan Poe. Bradbury, who would have turned 93 tomorrow, wrote his classic Fahrenheit 451 over nine days in an estimated 49 hours.

“Libraries raised me. I don’t believe in colleges and universities. I believe in libraries because most students don’t have any money. When I graduated from high school, it was during the Depression and we had no money. I couldn’t go to college, so I went to the library three days a week for 10 years.”

Bradbury’s writing practice reveals several factors that led to his success. He created a daily writing routine and, in the case of Fahrenheit 451, had set parameters around it that created a sense of urgency due to the timed writes he did on his rented typewriter.

He read literature each day for inspiration, including poetry, which he cited as contributing to the lyrical nature of his writing.

For more information about Ray Bradbury, read, The Bradbury Chronicles: The Life of Ray Bradbury by Sam Weller.
For more insight on how daily writing can help you meet your writing goals, read Carol Despeaux’s blog post yesterday, Walter Mosley’s tips for how to write a novel in a year or less.

Thanks to Wikipedia for information about Ray Bradbury under the Creative Commons Attribution-ShareAlike License.

From: Craft, Poetry, Writing Life
← Walter Mosley’s tips for how to write a novel in a year or less
Writing tips from the late author Elmore Leonard →
2 Comments Post a comment