Conquering your writing fears: what you focus on expands

by Carol Despeaux Fawcett on September 2, 2011 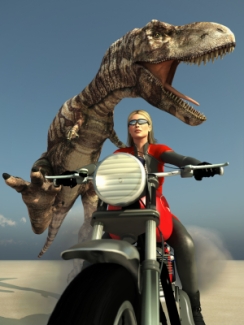 I’ve never ridden a motorcycle in my life. Never even been on one. So when my hubby recently suggested we take a motorcycle class, I had no frame of reference. I didn’t even know he’d owned one when he was younger and living in Southern California. I’m not sure what prompted his sudden need for speed, but we talked about it and decided to take the two-day safety course to see if we could pass the test (back in his early riding days there were no classes, nor tests). I wanted to take the class to see if I even enjoyed riding.

Being a type A, my hubby arranged for us to have a private class and to have both days collapsed into one (to save time, of course, since we are busy business owners). We passed the written test in the morning. No problem. Then from 12:30pm to 7:30pm we went through two days of riding instruction. Keep in mind I’ve never ridden. Keep in mind I didn’t know where the brakes or clutch were or what a choke was. (Other than this is what I wanted to do to my husband by six o’clock that evening).

I thought I’d have more fear than I did. I thought I’d be afraid of falling off the bike or losing control and killing myself. But I didn’t. I had no fear. I think it was because I was so busy learning the basics I had no time to consider anything else. I didn’t know enough to be afraid.

At the end of the day, we didn’t take the test because we were mind-numbingly exhausted. We decided to enroll in an additional ride-day a week later and take the test then.

In the intervening week before our next class, as our friends learned of our new maybe hobby, each person took it upon themselves to tell me in grizzly, horrific detail about every deadly motorcycle story they’d ever heard. (Thanks, guys. It’s good to be informed, but you know what a cautious person I am).

In our next class, I experienced fear with a capital F. Fear that I’d crash. Fear that I’d fail the test. Fear that I’d faint of heat stroke (it was a hot, August day on a parking lot). You name it—and I could come up with a fear for it. A few times, I even noticed my legs and arms shaking. It was that bad.

Fortunately, I’ve had years of experience overcoming my fears and already had a plan in place for dealing with fear. Just call me “The Fear Whisperer.”

Each time I felt a fear rise up, I took a few deep breaths and gave myself a mini-pep talk. During the test, I focused on each item that needed to be accomplished and broke it down step-by-step in my head before I started and then as I was riding. It worked. I passed the test with high marks and survived the day. (We’re still deciding whether we should actually get a bike).

Another woman in our class wasn’t so lucky. She failed the test for her second time. She wasn’t a bad rider, but I could tell that her fear is what made her fail. Every time she made a tiny mistake, she mentally beat herself up. She focused on her mistake until it became a monster in her mind. Her fear grew. An hour into the 5-hour class, she was in tears. She had no self-confidence. Her pep talks were negative. It was painful to watch.

Fifteen years ago, my hubby shared an axiom with me that still holds true today: WHAT YOU FOCUS ON EXPANDS.

The more the woman focused on her failures and her fear, the bigger they grew. Until they overcame her. Fear won.

As writers and artists we face our fears daily—not only fears of publishing but fears about revealing ourselves, fears of not being good enough, fears of failure or success. These fears may not be physically life threatening, but they can be psychologically and spiritually crippling.

My writing fears change. Lately, I’m afraid of that dreaded four-letter word PLOT. I feel safe and comfortable with characterization, poetry, prose, the beautiful line… But the word plot gets me quaking.

In the motorcycle class, the most important thing I did was to literally drive into my fear. I was afraid. I acknowledged it. Then I came up with a plan to overcome it.

I’m doing the same thing with plotting my next novel and overcoming my fear of that word. I even have a name for this plan: The Total Immersion Plan.

I’m also listening to storymaster Robert McKee talk about plot. Most importantly, when I work on my own plot, I call it something else – instead of my plot line (which still sends shivers through me), I’m now calling it my event line. Instead of thinking, “what’s my plot?” I ask, “what event happens next?”

By going fearward, I’m taking control of my life and my art.

Exercise: Make a list of things you’re afraid of in your writing or artistic life. Take one fear and come up with a plan to face that fear and conquer it. Name your plan. Devise a strategy. Take action. Then congratulate yourself for going fearward and not backward in designing your life.